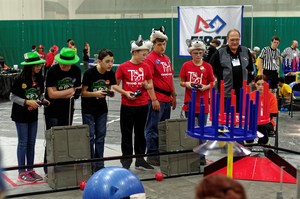 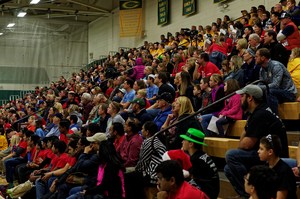 On December 3rd, the Coloma gym rang loudly with singing and dancing, yells of excitement, sighs of frustration, screams of joy, and aahhs of admiration. That day twenty-four junior high teams from around the State of Michigan, some coming from as far as Novi, West Bloomfield, and Midland, arrived at Coloma to compete in the first annual Sunset Coast Splash FIRST Tech Challenge (FTC) Qualifying event.  Several teams from the local area, such as St. Joe’s two “JoeBots” teams,  Lakeshore’s “LMS Lancers,” Hartford’s “Mech Tribe,” and the Robotarian’s little sister team, Lake Michigan Catholic’s “Mighty Michigan Mechanics (M3)” also participated. The event was hosted by the CW Tech Robotarians and Coloma Community Schools and sponsored by Whirlpool Corporation and Kendal Electric. Several area businesses, such as Hardings, Martins, Celebration Cinema, and Jollay Farms, supported event through financial and in-kind donations.

This year’s game, Velocity Vortex, was introduced at the beginning of September required the students to design and build a 18” x 18” x 18” robot that could shoot small balls into a basket, push lighted touch sensor pads, and lift a 2’ ball into a basket about two feet in the air both only through software programing and by drivers.  Each match consists of two alliances of two teams. The teams composing the two alliances change for every match creating an environment of “Gracious Professionalism.” This could be observed with the different teams circulating through the pit area making sure that all the robots are working the best they can since a team’s opponent this match may be their partner the next match.  There were several anecdotes of several teams having their robots programed to function correctly by the junior high team member of another team.

After the thirty qualifying matches have been completed, the top four teams pick two other teams to form an alliance of three robots to compete in the best-of-three elimination matches. The winning alliance at the Sunset Coast Splash FTC Qulifying event was made up of the Otsego’s Advanced Skilltronics (Alliance Captain), Novi’s Robo Rhinos,  and Stryke Force’s Screaming Eagles. The Robotarian’s little sister team was awarded the Judges “Fire Up Award” for their spirit and perseverance.

Next year’s event is already being planned with an increase to thirty four teams. This will expand on the 800-900 attendees and one hundred volunteers that participated this year.

One of the questions asked repeatedly by parents and students was why Coloma did not have a team competing at the event.  This question is especially appropriate since an announcement in the Coloma junior high last year produced about sixty students who were interested in being part of an Coloma FTC team. Unfortunately, the three FTC teams started last year could not be continued due to a shortage of adult participation. The hope is that these Coloma FTC teams will be started up again next year.