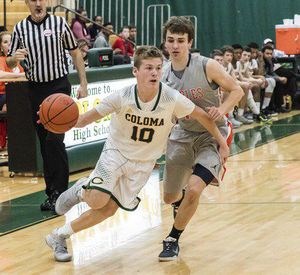 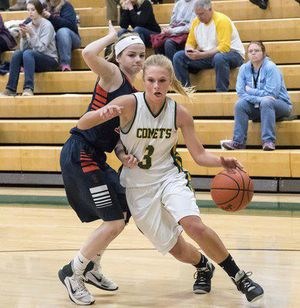 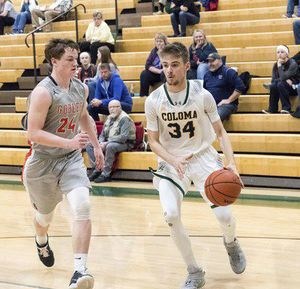 COLOMA — Seven turnovers in the third quarter put Coloma’s boys basketball team in jeopardy of losing a winnable game. But with a terrific fourth quarter performance, the Comets blew away visiting Gobles for a 63-45 Southwestern Athletic Conference Lakeshore Division win on Tuesday night.

“I’m proud of the kids,” said Coloma boys coach Paul Marfia. “Gobles is a team with 13 wins and they beat us last time at their place. We did what we were supposed to, we are improving.”

“It’s a great thing when your scorer is also your point guard,” said Marfia. “You can’t deny him the ball. He went out there and took it away from (Gobles).

“When you got a kid like that you get out of his way. He felt he cost us the game against Gobles last time and he wasn’t going to let that happen tonight.”

Gobles (6-4, 13-5) trailed 29-23 at halftime. The Tigers got off to a quick start in the third quarter with Tyler Hunter scoring back-to-back buckets cutting the lead to within in two.

Goodline scored on a three-point play at 6:53, drawing a foul off Tyler Stedman and putting Coloma up 32-27.

But the Comets got into trouble late in the quarter. A three-point play by Clayton Stapert cut Coloma’s lead to 39-36 with 10.6 seconds remaining. Hunt followed by grabbing a rebound and scoring a bucket with 2.5 seconds to go, cutting the score to 39-38 going into the fourth quarter.

“We got to be fundamental,” said Marfia. “We weren’t taking care of the ball and that’s very frustrating as a coach, you hate to do that. Those things add up.”

In the girls game the Comets struggled to contain Gobles.

Coloma mounted a brief rally in the third quarter.

Two buckets by Hailey Baxter pushed the Tigers to 28-20 and Coloma never caught up.

“It’s a helpless feeling,” said Paulsen. “The effort and intensity have to be there. When you’re not shooting well you have to do something well to stay in the game. We were in it at halftime, I don’t know what happened.”