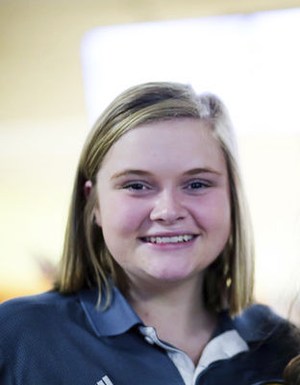 Coloma freshman Emily Feldten was “shocked” when she won a Division 3 girls bowling regional title, but her coach wasn’t.

“She’s been a very solid bowler from the beginning,” Coloma coach Carley Burrell said. “She has made a lot of improvements, and throughout the season I’ve seen her step up more as a leader. She has become more consistent. I knew she was fully capable of doing it, but I was very happy for her to see it too, that she could do it.”

Feldten bowled an 1,107 over six games to win the regional, including a 235 in her opening game. She impressed her coach not only with her bowling ability, but also by showing leadership as a freshman.

“We had two other bowlers that are very close in average with her, so I did not have a definite leader or anchor,” Burrell said. “I was looking for someone to be able to step up, be more competitive, be a little bit more vocal, and kind of show example. Emily, she filled that spot quickly and exceeded that.”

Feldten also plays volleyball and softball, and has a 3.3 grade-point average.

On Saturday, Feldten finished 31st at the state finals.

What was it like to win the regional as a freshman? It shocked me. I didn’t think it was going to happen.

Did you think had a chance after rolling a 235 in the first round? Yeah, and then I threw my bad game (a 141 in the second round). I thought I needed better, but then it happened.

What’s your favorite sport, and why? It would kind of be softball, and then bowling and volleyball. Softball is more active. It’s more fun, and I feel more competitive in that sport.

What got you interested in bowling? I’ve been bowling ever since I was four. I just liked it ever since then. My sister told me that she liked it, so I was like “Why not give it a try?”

What’s your favorite school subject, and why? Science. I like doing the experiments, the labs and stuff.

The Herald-Palladium’s Athlete Spotlight, sponsored by Whirlpool Corp., appears weekly on Monday in The HP Sports section during the school year. Athletes are chosen by HP staff members.