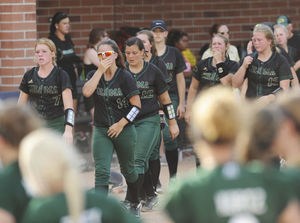 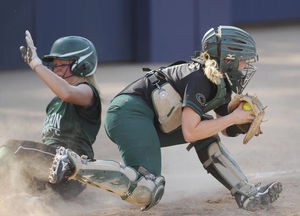 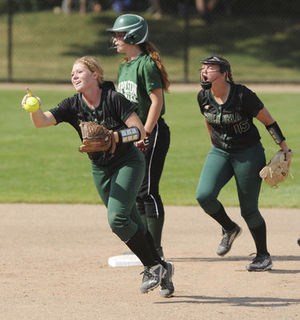 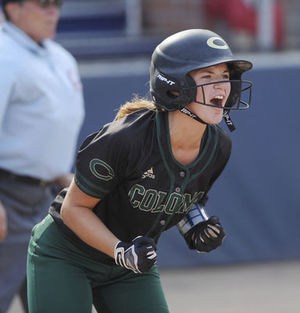 HOLLAND — Coloma’s softball team would not go out quietly.

With a sixth inning rally, the sixth-ranked Comets managed to tie No. 3 Napoleon and looked to be on their way to a Division 3 state semifinal berth.

However, they had to get past the Pirates top three hitters first, and instead fell 9-7 in the state quarterfinals at Hope College.

“I told the girls it stinks losing, but in my mind it is better to lose getting beat than beating yourself,” said Coloma coach Wendy Goodline. “I would have liked to have seen a couple things done better, but Napoleon is a good team.”

Coloma (34-9) loaded the bases in the top of the sixth when Kayla Yore hit a long single out toward right field. Megan Koenigshof scored the run after Napoleon catcher Rachel Griffin dropped the ball at home plate.

The Comets scored again after pitcher Sydney Coe walked Jaidyn Hutsell forcing a run in, inching Coloma to a 7-5 deficit. But it was Nicolle Larson that had the big showing, as she drove in a massive two-run single to tie the game at seven.

“I’m proud of the girls, I’m proud of their comeback,” said Goodline. “Nicolle has been a four-year player for me, and she had a great game. We played here her freshman year, and they walked the hitter in front of her then. I told her at that time that they had walked the batter in front of her just to get to her. Today, when she went up, I put my arm around her and said ‘This brings back memories, doesn’t it?’

“I then slapped her on the head and told her to get a hit, and she did.”

Napoleon (40-2) wouldn’t let the Comets rest. After grounding out Madyson Bacon, Coloma had to find a way to stop the Pirates top hitters in Dylan Willey and Paige Kortz.

Both used slap bunts to get to on base. That set things up for heavy hitter Rachel Griffin, who drove both runners in with a hard double, taking a 9-7 lead.

“They might have the best 1-2 punch I have seen in my career, honestly,” said Goodline. “They’re talented, they’re capable. They can do whatever they needed to do.”

“I have eight seniors on my team that play a lot of summer ball,” said Napoleon coach Doug Richardson. “They’ve played 148 games for me, and they don’t get shaken up. We come back and find ways to win it. We just find a way.”

Napoleon took control from the start, using Willey and Kortz to get on base with Griffin driving them home.

Coloma scored its first runs in the third inning. Koenigshof hit an RBI double to bring in Morgan Wagner, and Hutsell used a sacrifice bunt to bring in Koenigshof for a 2-2 game.

Griffin hit an RBI double to take a one-run lead, but it was Haley Rose’s two-run homer that really hurt as it crushed the Comets’ budding momentum with a 5-2 lead.

From then on, Coloma walked Rose.

“We weren’t going to let her have another swing,” said Goodline about Rose. “We felt like after her we could get people out. We were going to make other people earn it.”

Wiley walked away with three singles and an RBI. Kortz had two singles, while Griffin had two doubles and five RBIs.

Coloma swapped ace Skylar Crisenbery with Hutsell in the fourth inning. Crisenbery gave up six hits in her time in the circle, walking one and giving up five runs. The change helped throw off Napoleon a bit, and allowed Coloma to score one in the fifth.

“We didn’t want them to see Skylar more than twice,” said Goodline. “Looking at (Napoleon) before the game, they are a good comeback team, meaning they adjust well against pitchers.”

“We battled,” continued Goodline. “(Napoleon) is tough. I was impressed. It was a great season, a great comeback.”