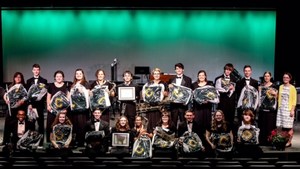 COLOMA — Coloma High School band members who intend to play in a collegiate band have an opportunity to get a $1,000 scholarship.

The creation of the Rodney Weir Scholarship this year through the Berrien Community Foundation aims to encourage students from Southwest Michigan to think and dream big, according to a news release from the foundation.

When Rodney Weir graduated from Coloma High School in 1988, he headed to the University of Michigan, joined its marching band and lead it as the drum major for two years.

“Leading the University of Michigan Marching Band was never something I dreamed was possible. But, with some hard work and determination, it happened. There is no reason that other students from area high schools shouldn’t chase big dreams,” Weir said in the news release.

“This is such a great opportunity for our students,” Coloma Band Director Cheryl Thomas said in the news release. “Band teaches so many life skills – leadership, teamwork, commitment, dedication. Rodney Weir is an example of putting those skills to work and going out and achieving your dreams. We are just so thankful for what he is doing.”

The scholarship will begin by offering one $1,000 award to a Coloma High School student who intends to continue to play in a collegiate band. Weir hopes to extend the opportunity to other schools as funds become available.

“So many students are overwhelmed by the cost of a higher education,” said Lisa Cripps-Downey, Berrien Community Foundation president. “These scholarships not only help relieve some of that burden, but also let the student know that someone believes in their ability to succeed.”

Weir is seeking further donations for the scholarship from anyone interested in supporting students who have participated in band and see the value it brings. To support the scholarship fund checks can be sent to: BCF/Weir Scholarship, c/o Berrien Community Foundation, 2900 S. State St., Suite 2E, St. Joseph, MI 49085.

Online donations can be made at berriencommunity.org/donate. Donors should note Weir scholarship in the instructions line.