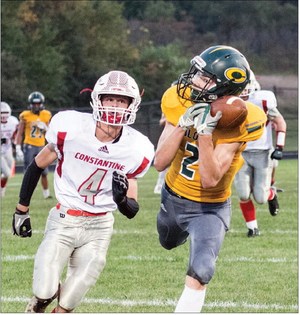 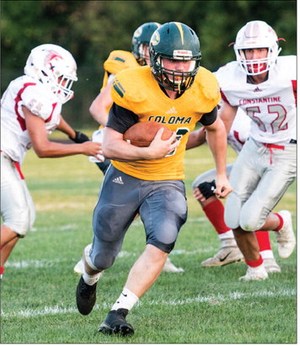 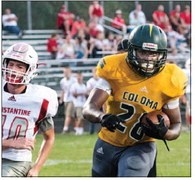 COLOMA — Coloma’s football team got a big shot of confidence Friday night. The Comets used a stingy defense and a rapid offense to rout Division 6 No. 9-ranked Constantine 41-0 in a Southwestern Athletic Conference Valley Division opener.

“That is a quality program, they are every year,” said Coloma coach Joe Stephens about the Falcons. “I don’t know if it was the best Constantine team, but when you play Constantine you play a team with a lot of tradition. Our kids did a good job being themselves.”

But after the stop, the Comets fumbled on their first play and lost possession.

A sack by Jamane Smith and another by Zack Lake managed to back up the Falcons to the 32-yard line. From there Coloma managed to stifle Constantine for another turnover, and eventually scored on a 19yard run by Lake.

Derek Plitt made the PAT, giving Coloma an early 7-0 lead.

Caleb Ellis and Smith added a pair of TDs in the second quarter, boosting the Comets to a 20-0 halftime lead.

“Let’s be honest,” said Constantine coach Shawn Griffith. “Coloma is a pretty good football team. We tried to convince our kids all week, and I think they are finally convinced. We had negative plays or fumbled a snap, something happened to put us behind the sticks.

Zach Goodline completed 5-of-6 passes for 112 yards, throwing a 27-yard TD pass to Calvin Starnes as well as a conversion. He also ran nine times for 50 yards.

“He can run triple option and he’s calling plays,” said Stephens of Goodline. “That first touchdown he called the play. He has the maturity to get the ball to the right guys to make big plays.”

Levi Wilkens and Smith were both key players on both sides of the ball.

Wilkens ran seven times for 54 yards, made three catches for 75 yards and had three tackles. Smith ran 12 times for 88 yards scoring twice, and had five tackles and two sacks.

“They’ve played with a chip on their shoulders all season, but they haven’t played an offense like Constantine’s,” said Stephens. “We went to our depth because of the heat. We split time at fullback between Jamane (Smith) and Zack (Lake). It keeps both of them fresh. We always want to give a fresh body to the defense. Jamane is just a heck of a football player. You need those guys that can run through anything.

“I hope we can turn this into a momentum boost,” continued Stephens. “In the last couple of years we’ve had our biggest letdowns after our biggest wins, so I just want to keep worrying about ourselves. They got to celebrate this and enjoy this win for sure.”