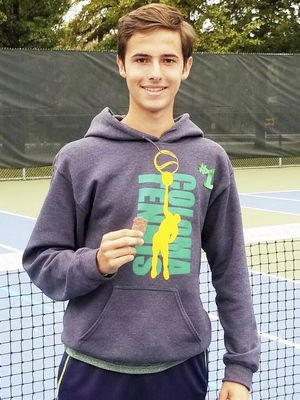 At home on the tennis court

Coloma's Luis Sanchez may be nearly 2,000 miles from home, but he's fitting right in on the tennis court.

Sanchez, 15, a sophomore at Coloma, is spending a year in Michigan through the program International Student Exchange, and has become the Comets' top singles player on the tennis court.

Sanchez is originally from Saltillo, the largest city and capital of the northeastern Mexican state of Coahuila.

He will be competing in the Division 4 state finals at Novi on Friday and Saturday.

"Luis is a very talented athlete," said Coloma coach Jamie Dawson. "He is a tough opponent on the court because of his knowledge of the game and his ability to be strategic in devising a plan to outsmart his opponent.

"Luis is also one of the nicest young men you will ever meet. He is always gracious to his opponents on and off the court. At regionals on Thursday, he even had other schools and their fans cheering for him simply because he is so genuine and friendly."

Though Sanchez is only staying in Michigan for the school year, he hopes to one day earn a tennis scholarship and return to the United States for college.

Once the tennis season comes to an end, Sanchez plans on using the rest of his time in Michigan to improve his English, try new things and make new friends.

I was able to choose the regions where I would like to be, and I chose Michigan and Massachusetts. I was selected for Michigan. I received a host family in Coloma. I arrived on August 12 and I leave to return home in early June.

What is your favorite part about playing tennis?

I enjoy playing tennis. I like to meet new people and make friends from different regions. I have fun.

How did you first start playing tennis?

I have an uncle in Mexico, Luis Alberto Garcia Elizondo, and I started to play with him. When I started I was really bad, but I liked it so I kept playing and training to improve my game.

Is there anything that you would say is the biggest difference between living in the U.S. compared to Mexico?

It's hard for me to speak another language, and everything is very different. I am getting better and improving my English every day. The food is much different here, but I like it and I am glad that I am here.

What has been the best part of your experience in the exchange student program?

I have made many new friends. I am learning another language and living in a completely different culture.