Welding together a future 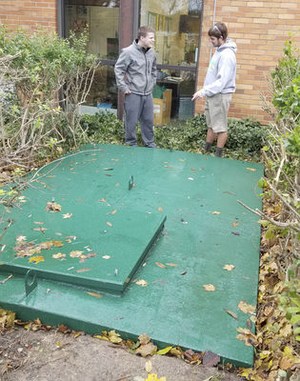 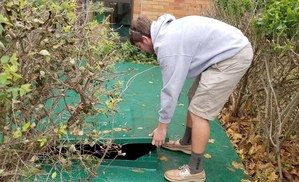 COLOMA — Two students taking welding at Coloma High School were presented a problem and solved it.

A pit with some old equipment next to the entrance to Coloma Junior High School was found this fall, with a lot of water in it because the cover over it was very old.

School officials asked Chuck Luchies, the machine tool and welding teacher, if his students could do anything.

They took measurements, made blueprints, cut out lengths of quarter-inch steel, welded, grinded and created a 950-pound, 12-foot by 8-foot Coloma green cover.

“They problem-solved it,” Luchies said. “They had to spread the heat out while they welded to avoid distortion, they had to make sure the material stayed strong enough and they had to keep it from having the problems the old cover had.”

Sutherland said they designed loops for the top of the cover because they knew they would need to use large machinery to carry it over to place it.

“The cover leaked, so our goal was to have it not leak,” Sutherland said. “We designed a hatch with a peak so the water could run off.”

They admitted they messed up the hatch part the first time.

“They saved us thousands of dollars,” said Superintendent Pete Bush. “And applied the work that they’ve done in machine tool and welding over the years to do this project that it will outlive all of us.”

Luchies said the students are graded on their projects but it is more of an individualized curriculum based on what the student is interested in.

Noack hopes to go into welding after graduation and Sutherland is deciding between welding and electrical work.

They’ve done many other projects in the class, including a bike rack Noack is working on right now.

“I designed it, welded it and even engraved custom messages on the sides of it,” he said.

The high school doesn’t have a bike rack, Luchies said.

“We always try to donate our projects or make sure they have a purpose to make the area a better place,” he said.

Luchies said all of the materials for the student’s projects are paid for through fundraising, scrapping, donations from local businesses and grant funds.

“We build up revenue through the year so there is no cost to the school,” he said. “The students aren’t getting anything for the projects, just the experience.”

The machine tool and welding program brings in people working in the industry too, to act as mentors to the students.

Luchies said there are a lot of jobs in those industries in the area for the students after they graduate and the programs at the school help get the students ready for them.

Students from the class take part in the Michigan Industrial and Technology Education Society competition each year. Coloma is hosting the regional competition in May and the top four in each category go on to the state competition in Lansing. Coloma students have been state champions the last four out of six years, Luchies said.

“Students put a lot of time and effort into the MITES competition,” Sutherland said.

They agreed being in his class is the best part of their school day.

“I wouldn’t do this for four hours a day if I didn’t love it,” Noack said.