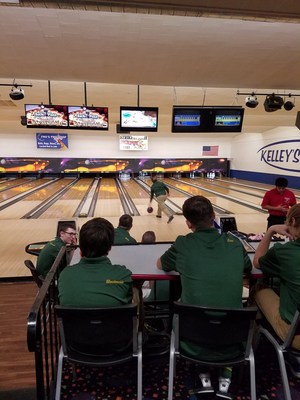 Coloma’s girls bowling team is in a pretty nice position this season, as the Comets have all their starters from last year’s Kalamazoo Valley Association championship squad coming back.

And they won’t be graduating any bowlers at the end of the season, either.

“It feels awesome. This year I get to work with girls that have been with me before, we don’t have to start from scratch,” Coloma girls coach Carley Burrell said. “We’ve been able to get right to work with practice and work with them on what they need to improve on individually. We don’t have to correct many bad habits.”

The Comets were 10-0 in the regular season, and were ranked No. 1 in Division 3 going into regionals. However, a rough day at the lanes landed them in fifth place and they failed to advance to the team state finals.

“It wasn’t ideal,” Burrell said. “We walked in with our heads held a bit too high. We were the top bowling team in the division and that made us overconfident. I think it has changed things for them. Being the same group of girls going through what we did last year and cleaning up some of mistakes has helped a lot.

“They are comfortable with each other. I’ve been able to switch some of the girls to different positions. We’ve improved immensely.”

One of the changes Burrell made is at the anchor slot. Last season Emily Feldten was the team’s anchor. Now Morgan Hosbien holds that honor.

Burrell said she made the decision based on the bowlers’ averages. Hosbien is averaging between 174-175 per game, while Feldten is hovering around 150.

“Last year I had five girls in the starting lineup that were about the same as far as averages,” Burrell said. “Now there is a little bit of a gap between Morgan and Emily. Even though Emily was named third-team all-state and made it to the individually regional, Morgan has performed well under pressure.”

Coloma is currently 4-0, and is benefiting from the team’s offseason work. Leading the Comets are Lainey Meader and Narelle Hickman. Meader holds a 197 game average and Hickman is around 151.

“These girls have their own expectations this year,” Burrell said. “If they miss their spares, which should be easy to make at this level, they are giving themselves push-ups.

“Right now everything is going the way we hoped it would be going. I would love to see us repeat as conference champions. We want to place in regionals and remained ranked. We need to average 800 or higher as a team to make it to the state finals, and we are headed that way.”

Coloma’s boys bowling team is restarting from the ground up.

Cleary is holding a 195 average, and the pair are acting as assistant coaches in lending their experience to their new teammates.

“They are really encouraging. They help the rest of the team with their form, and between frames they tell the other kids how to pick up their spares,” Ball said.

Because of her team’s inexperience, Ball said her main goal by season’s end is consistency.

“Last week we bowled against Bronson, and they are our toughest team to compete against,” she said. “We bowled super well against them. This week we didn’t do so well. I’m looking to elevate the averages and get everybody on the same level at the end of the year.”

If all goes well, Ball said that her team will be in a similar position that the girls team is in currently. Of her 10 bowlers she has one senior (Cleary) and two juniors. The rest are freshmen and sophomores.

Already standing out among the new bowlers are Nick Santarlas and Noah Blankenship.

“There is a lot of promise,” Ball said. “Nick is one of my top five. Noah is within the top six. We are going to work hard on improving this year.”