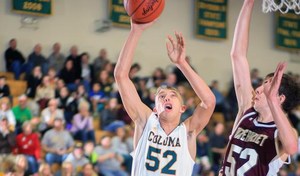 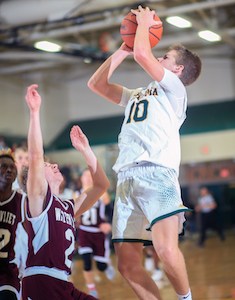 By Wes Morgan
Special for Second Half

When Coloma varsity boys basketball coach Paul Marfia was asked to dissect the Comets’ undefeated season up to this point, he said the bruises his players consider badges of honor tell most of the story. The Comets, who are tied for 9th in The Associated Press’ Class B state rankings, may not be the most athletic or talented team on the west side of the state. But their tenacity, toughness, heart and unselfishness have propelled them to a 13-0 overall record and 8-0 mark in the Southwestern Athletic Conference’s Lakeshore division.

The program hasn’t won a conference championship since 2004 and now is positioned end that drought, having already pulled off confidence-fortifying wins over SAC Valley powers Kalamazoo Christian (12-1) and Kalamazoo Hackett Catholic Prep (12-2) after trailing the latter by as many as 16 in the third quarter.

This winter has been the culmination of five years of Marfia preaching that, in the words of Aristotle, the whole is greater than the sum of its parts. Of course, junior point guard Zach Goodline, who’s averaging 27 points per game this year and adding to the program’s career points record with every bucket, plays a particularly big part for the Comets.

“We know if we don’t play the way we should play, we can take a loss,” Goodline said. “But it’s nice finally winning a bunch of games.”

As do a host of others, including a core group of seven seniors, some of whom were on varsity in 2015-16 and experienced a five-win season. They endured some hard knocks.

“It’s a process; I’m an Italian and I grew up as a farmer. I know things take time, and it’s not done in a day,” said Marfia, who experienced a 13-9 first campaign at Coloma in 2013-14 with a solid senior class, though he started from scratch in Year 2. “I was actually finding kids in the hallway. ‘Hey, I heard you used to play in the seventh grade. Why don’t you be my power forward?’

“There wasn’t a culture there. In the past it was there. But it’s been a long time since then. There was a big dip because of the culture and understanding what it means to play basketball the right way and understanding what that commitment is. It’s starting to go in the right direction, and this group of seniors are the ones that are committed to that.”

It was only a couple years ago the Comets were hopelessly lost on the defensive end, sometimes showing as many as six different looks in a game in a desperate effort to find something effective. Now Coloma sticks mostly to man-to-man and the basic principles of “attitude and effort,” holding opponents under 47 points per game.

Four-year varsity player Levi Wilkens is certainly committed, and he’s going to make sure everyone in a Coloma jersey is as well. Wilkens was asked to shoot less last year and focus on leading the team defensively. It took him a while to accept that role, he said, and now he revels in it.

“I think I’ve matured a lot more,” Wilkens said. “We’re going chapter by chapter. We’re on chapter 13. We don’t look ahead, and we focus on each team.”

“It’s awesome to see,” Marfia said. “Here’s a kid who was all-conference and only averaged 2.5 points per game. Levi is a kid who’s been a captain, a point guard and a defensive kid. I’ve never seen a kid score zero points in a game and yet control a game as much as he does.”

Just a few hours after being interviewed for this story, Wilkens left Monday’s game at Niles Brandywine in the first quarter with a broken nose and a gash that required 16 stitches.

“He’s a tough kid,” Marfia said of Wilkens after the Comets held on for a 73-65 victory. “He had a face for radio anyways. He’ll be back tougher and uglier than ever. He understands that’s what separates us from the other team.”

Seven players have scored in double figures this year for Coloma, proving they’re just as unrelenting on the offensive end of the floor. Goodline fouled out with a minute left against Brandywine after scoring 19 points. Junior forward Phillip Caldwell shouldered a bigger load and finished with a career-high 27. Prior to the contest, Caldwell was averaging eight points per game.

Sophomore forward Michael Dancer worked his way into the starting rotation and produced 72 rebounds, 15 blocks and 5.5 points per game prior to the matchup with Brandywine. Senior Robbie Schroeder is the team’s center and is averaging just a hair under 10 points per game with a disruptive presence on the defensive side.

“We’re focusing on the big goal and working toward one thing,” Schroeder said. “We’re not all good scorers like Zach, so we realize if we want to win, we have to do our part on the defensive end. That’s what we believe in.”

Senior Chris Brown has been an invaluable sixth man for the Comets, and fellow classmates Tevon Blazier, Brendan Lute, Willie Donald and Adam Hearn have helped reshape the culture.

“It’s been a long journey,” Hearn said. “I’ve been playing with some of these kids since third or fourth grade and have seen everybody grow. Coming together as one and being a solid team is amazing.”

“You have to have kids that understand what it means to be part of a team,” Marfia said. “I see that in these kids. They play the way you want them to.”

Wes Morgan has reported for the Kalamazoo Gazette, ESPN and ESPNChicago.com, 247Sports and Blue & Gold Illustrated over the last 12 years and is the publisher of JoeInsider.com. He can be reached at wmorgan@joeinsider.com with story ideas for Berrien, Cass, St. Joseph and Branch counties.