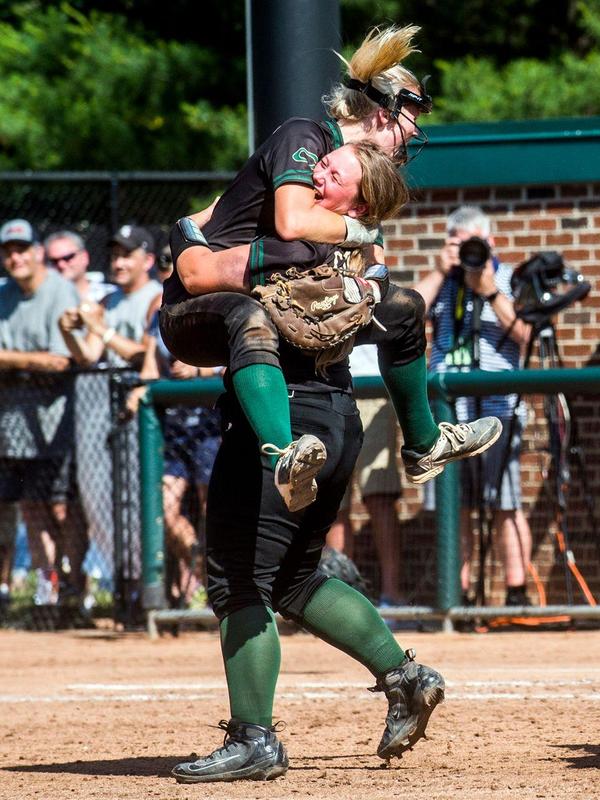 EAST LANSING, MI -- Jaidyn Hutsell couldn't get the win Saturday for Coloma's softball team but she did pick up the save and in the end that's what counted most.

Hutsell was the Comets' starting pitcher in the Division 3 state championship game at Secchia Stadium and she worked the first 3.2 innings before Millington's bats came to life and knocked her out of the game.

But when Coloma rallied to regain the lead in the top of the seventh, Hutsell came out of the bullpen in the bottom half and closed the door for a 7-6 victory to give the Comets their first state softball championship.

"I don't think I was disappointed at all" when the first pitching change was made, Hutsell said. "I knew Skylar (Crisenbery) would be a good person to come in. She's a great pitcher, too.

"I was very excited going back in. Skylar did a great job keeping everything under control and not having any runners score. I just in game and was confident."

Crisenbery, who started as the Comets designated player, replaced Hutsell with two out in the bottom of the fourth inning after Leah Denome's triple to the fence in center field fence drove home two runs to give Millington a 4-1 lead.

Although Denome ended up scoring to give the Cardinals a four-run lead, Crisenbery got catcher Sydney Bishop on a ground ball to end the inning.

It stayed 5-1 until the top of the sixth, when Coloma started its comeback.

The Comets scored three runs in top of the sixth, Millington got one in the bottom of the inning and the Coloma added three more in the seventh to take a 7-6 lead -- its first since the opening inning.

When Crisenbery allowed a leadoff single to Sabrina Gates in the sevent, coach Wendy Goodline called Hutsell back to the mound.

"When we took her out," Goodline said, "we told her, 'You're not done. You're the DP. I can put you back in to pitch anytime. You gotta keep in the mental state. We need you to hit. We need you to be able to go back in.'

"So when we started that seventh inning, we sent her to the bullpen just in case. I felt like we needed her (velocity). I thought that they would try to overswing a little bit and I thought her speed would be beneficial at that point."

It was although that doesn't mean Millington didn't mount a threat.

Hutsell struck out the first two batters she faced before Darrien Roberts walked and Denome was intentionally walked to load the bases. But all three runners were stranded when Hutsell got opposing pitcher Gabbie Sherman on a grounder to shortstop.

"It was a great game," said Millington coach Greg Hudie, whose team was ranked No. 1 to Coloma's No. 2. "Obviously it didn't end the way we wanted but I can imagine as fan it was one of the most entertaining games down here.

"We were up and only needed three outs to seal the deal and unfortunately couldn't come through. We were pounding the ball, I felt. We left the bases loaded, we had no outs (in the fifth) and we didn't score. That was a huge blow on our part.

"Maybe that was the momentum they needed, to see that. But when you have the bases loaded and don't score, that's hard to take."