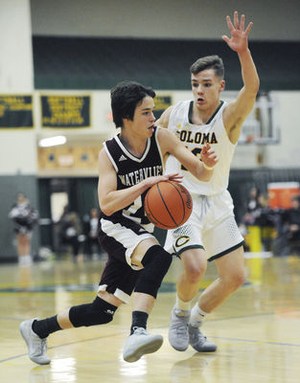 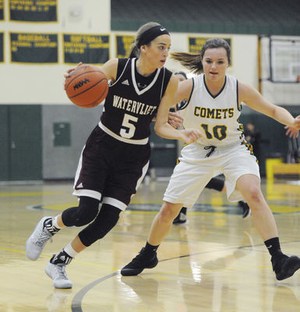 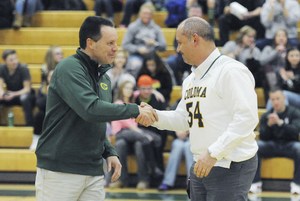 The sophomore guard opened the first quarter against visiting Watervliet with three 3-pointers and 13 points. He helped the Comets close the quarter with a 19-10 lead, and later a 54-36 Southwestern Athletic Conference Lakeshore Division win.

“He’s definitely worked on his ball skills and his shooting,” said Coloma boys coach Paul Marfia. “He’s done a tremendous job. He’s very studious and I think he’s getting after it.”

Watervliet’s girls team stayed undefeated with a 42-22 victory over the host Comets.

Goodline finished with a game high 30 points, with six treys and went 6-for-6 from the free throw line.

“He’s difficult to guard,” said Marfia about Goodline. “It’s like going after a greased pig up there. It can be frustrating for kids, trust me. I’ve felt it myself playing him one-on-one so I know their pain.”

The Comets took advantage of the struggling Panthers’ inability to make clean passes. Watervliet ended up with 16 turnovers, six of which were forced.

“That’s too many,” said Watervliet boys coach Chris Prom. “That’s 10 extra possessions they get. They took care of the ball and that hurt us.”

“Watervliet has tremendous athletes,” said Marfia. “They are tall and long, and we tried to take advantage of some ball skill disadvantages they may have.”

The Panthers were timid in their shooting. Despite a big size advantage over the smaller Comets, Watervliet lacked an aggressiveness needed to drive in for buckets.

“We got to shoot,” said Prom. “We can’t be afraid to shoot. We weren’t shooting particularly well tonight. Coloma shot well and we couldn’t figure them out.”

Coloma’s girls came out aggressive against the Panthers. The Comets held a 14-11 halftime lead, but cooled off in the second half, falling 42-22 by the game’s end.

Katie Schultz followed Pitre with her own 3-pointer to push the Panthers to 23-14.

“Bringing in energy right off the bat has been a problem for us in some games,” said Watervliet girls coach Jason Forrester. “What Jaelyn did for us was huge. She’s a streak shooter and she caught fire and she carried us in the third quarter. That opened some stuff up for other people, and we feed off that offensively. Jaelyn was huge, no doubt it.”

“Before they hit (their 3s) we had chances,” said Coloma girls coach Fred Paulsen. “We are limited, we are very limited. When we get a chance to do something we got to take advantage of it. Especially scoring.”

“We talked about getting a significant win and that would have been it,” said Paulsen. “It would have been a chance to make a statement. Shooters got away from us and that’s what they do. They knock them down.”

In between games, both Coloma and Watervliet superintendents presented the results of their United Way fundraiser.

Both schools competed against one another to raise money, with the official from the school raising the least having to wear the other school’s team colors.

Watervliet raised $4,438 compared to Coloma’s $6,926, resulting in the Panthers’ Kevin Schooley having to wear green and yellow during the boys game.

The combined $11,364 was the most either school has raised in the last five years.