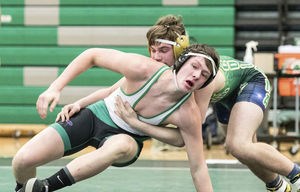 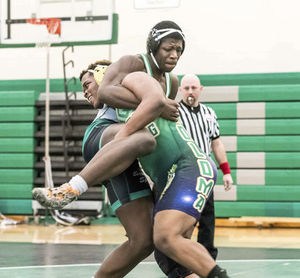 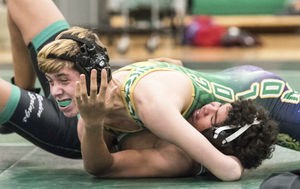 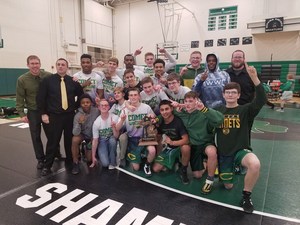 The Comets (16-13) will take on Constantine in a regional opener in the Coloma gym next Wednesday. Constantine defeated host Dowagiac 39-33 to win its district. Lake Odessa Lakewood takes on Hopkins in the other regional semifinal.

“We had to bump up a lot of our guys in order to match up with them,” said Coloma’s Ashley. “But it all worked out in the end except for Ian (Ishmael) getting hurt.”

Ishmael, a freshman 130-pounder with a 28-10 record, was wrestling Berrien Springs’ Juan Ibarra at 135 when he apparently dislocated his left elbow and was forced to forfeit the match in the second period. Ishmael was losing at the time.

“It popped out on him, and they couldn’t get it back in,” noted Ashley. “Hopefully he’ll be alright.”

The meet started at 189 pounds and both teams alternated pins and forfeits through the first nine matches with the score deadlocked at 24 after Ishmael’s injury default at 135. But the Comets then won the next four matches, including three by pins and a wild 14-12 decision by Sergio Hernandez over Sean Williams for a 45-24 advantage which allowed Coloma to forfeit the last match at 171.

Hernandez’s victory at 152 pounds over Williams was the only match of the meet that wasn’t decided by a pin or forfeit. Hernandez trailed Williams 8-4 entering the last period, but managed five straight takedowns, including the last with one second left, for the thrilling 14-12 win that clinched the team victory for the Comets. It was Coloma’s seventh team district wrestling crown. Coloma’s only team regional title came in 1996.