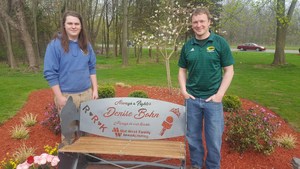 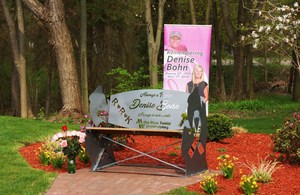 As the final strains of Prince’s “Purple Rain” played out over a small public address system, real raindrops began to fall as if on cue from the heavens above this morning, concluding a brief ceremony on the grounds of the Mid-West Family Broadcasting studios in Benton Harbor commemorating a beautiful new memorial to the life and times of renowned local broadcaster and community activist Denise Bohn.

Mid-West Family Broadcasting President & General Manager Dave Doetsch explained the beautiful new tribute which was shepherded by Chief Engineer Terry Green and is now a permanent remembrance of the amazing woman who was tragically taken from us one year ago today when her husband killed her and then turned the gun on himself.

The striking new steel & wood bench was hand-crafted by Coloma Senior High School Student Justin Ludwig. Each end of the bench is comprised of smooth sheet steel cut into the shape of the Michigan mitten with one strut bearing the Michigan State University Spartan logo and the other a Pink Ribbon for Breast Cancer Awareness. Laser cut into the seat back of the bench are the words “Always a Fighter, Denise Bohn, Always in Our Hearts.” Also cut into the backrest are the Mid-West Family logo, a microphone, a tiara crown, and the first initial of each of her children’s names separated by hearts.

The newly minted park setting for the memorial bench was skillfully created by the team from Second Nature Landscaping with new floral plants and evergreens on the periphery of the mulched pad, set off by a glorious flowering tree that has been there for a number of years. A newly constructed brick path leads from the sidewalk entry to the radio stations and flares out as a base for the new bench. Staff members placed a bouquet of pink roses and one, single, long-stemmed red rose at the base of the bench in today’s tribute.

Denise was well known for her tenacity as a first rate news reporter both with the WSJM News team, and for her work with South Bend Television Station WSBT. Having been diagnosed with breast cancer at a far-too-young age, she was equally tenacious in her never-ending battle to raise awareness for breast cancer throughout the Midwest with her strong advocacy with the Susan G. Komen Michigan contingent. She was an unabashed leader ready, willing and able to ask anyone to do everything that they could to end the scourge of cancer.

She was a breast cancer survivor, and earlier in life sustained life-threatening head and neck injuries in an automobile accident up north in Michigan only to be senselessly taken by the father of her own children on an April day that none of us who knew her will ever be able to forget.

Visitors are welcome to see the new tribute on the grounds of the radio stations at 580 E. Napier Avenue in Benton Harbor, but we simply ask that you be respectful of the fact that the building is a very busy place with many employees, listeners, visitors and business people frequenting the place and there is limited parking on site.