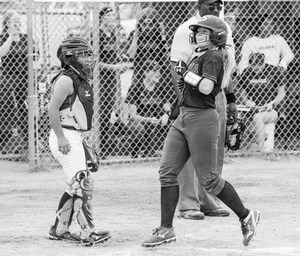 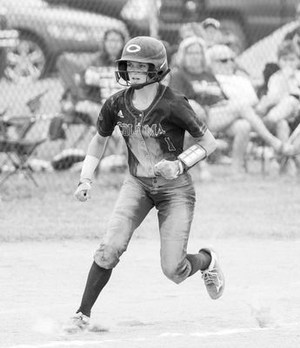 WATERVLIET — For the second straight season Coloma’s softball team walked away as the Division 3 district champion, as the Comets routed Hartford 9-0 on Saturday.

“It feels good,” Coloma coach Wendy Goodline said. “I’m excited for the girls. They had goals for the season and they’ve hit two of them. Now we have to keep going.”

Coloma (32-8) will host the regional tournament, and plays Schoolcraft at 10 a.m. Saturday, June 3.

The Comets got out to a comfortable 4-0 lead in the first inning. Morgan Wagner hit an RBI double to get Coloma started. Jaidyn Hutsell followed with an RBI single, while Jenna Walter closed out the inning with a long, two-run single.

“It was tough,” said Hartford coach Steve Galvan. “Going into the game we knew we had a big mountain to climb. I idolize coach Goodline’s program.

“We played them in the regular season and they (mercy ruled) us twice. We wanted to be competitive with them. We have a young team, so hopefully we can keep learning and compete with them down the road.”

Skylar Crisenbery gave Hartford (21-17) little to work with. Pitching a complete game, Crisenbery struck out 11 with zero walks and allowed only three hits.

“(They) have two great pitchers in Skylar and Jaidyn (Hutsell),” said Galvan. “They play a tough schedule compared to ours, and they are victorious which leads to confidence going into the postseason.”

Coloma added three runs in the fourth inning. Crisenbery hit a lead off single followed with a single by Megan Koenigshof. Kayla Yore then drove a run in with her own single and Wagner drove in another run with a sacrifice fly.

“I was irritated how we came out in the first game,” said Goodline. “We didn’t put the nail in (Lawton). But we stayed at it in the second game and drove at Hartford.”