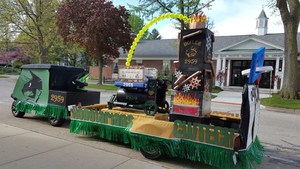 COLOMA — A local robotics team is seeing its public awareness initiative take a step forward with the introduction of a bill to the state Senate.

The CW Tech Robotarians took it upon themselves this season to not only build and compete in robotics competitions, but to teach the public about convergence insufficiency (CI) and lobby that CI screening be implemented as part of a standard school-age vision test.

The bill, introduced last week, is co-sponsored by State Sen. John Proos, R-St. Joseph and would ensure Michigan students who fail a vision screening would get a comprehensive eye exam.

CI often impacts people at a very early age and can stunt reading development. It is caused by eye muscles not being able to maintain focus on a point for a long period of time and affects 10 to 15 percent of the population.

The Robotarians launched the campaign after a teammate was diagnosed with CI.

The group made a brochure, an educational video and presented information about CI to the Coloma School Board, St. Joseph Lions Club, FIRST Chairman’s Award Committee at the Shepherd Event, and to teams and judges at the four events the team attended this year.

Part of the team’s initiative was to draft and send letters to elected officials, local leaders, school superintendents and principals, to teach them about the condition and ask them to consider implementing CI screening during the K-6 period of a child’s education.

“I was contacted this year by the CW Tech robotics team in Southwest Michigan about a team member who suffered from undiagnosed vision problems for years,” Proos said in a news release. “He was finally diagnosed with convergence insufficiency, finished treatment for the disorder and is now doing fine. Unfortunately, standard eye tests do not always uncover disorders like CI. As a result, parents or teachers then suspect that a child has a learning disability instead of a vision problem.”

Senate Bill 411 would require a comprehensive eye and vision exam as the next step for a child who fails their already required grade school vision screening, or is identified as a struggling reader.

“As a sophomore representative of the CW Tech Robotarians and one of the members who has been pushing head first on our CI awareness campaign, I will say, on behalf of my team, that we are absolutely ecstatic on this bill being introduced and are ready to work even harder to get it passed,” Jarod Martin, a Coloma High School sophomore and team member said.

Under the bill, the local health department would receive a written request that a child needs a comprehensive eye and vision exam and would notify the parent or guardian that an exam is needed. The parent would then have to ensure that the child has the exam, which emphasizes visual functioning. The recommendation from the eye care professional would then be submitted to the local health department and parent of the child.

“Catching and treating children’s vision problems early can help improve academic performance and enhance their quality of life,” Proos said. “It also could help save families and schools the costs of unnecessary medical care and special education. All of this can happen by simply requiring children who fail a standard vision test to get a comprehensive eye exam.”

Dale Quattrin, founding mentor of CW Tech Robotarians and drafting/engineering instructor at Coloma and Bridgman High Schools, said the introduction of this bill also dovetails with a breakout session the Robotarians will be conducting on CI at the Lions Clubs International Convention in Chicago on July 2.

“This is fantastic news that legitimizes the efforts of the team in expanding awareness about the impact of CI and other visual disorders on student reading and education. CW Tech would like to thank Sen. Proos for his support in bringing this issue to the state-wide level,” Quattrin said.

The Robotarians are made up of freshman-to-senior students from Coloma, Watervliet, Lake Michigan Catholic, Michigan Lutheran and Bridgman high schools.