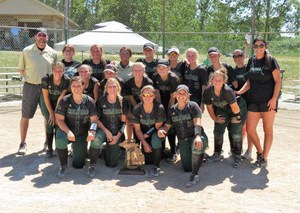 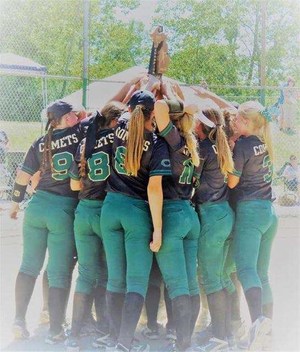 Coloma softball keeps the runs off the board

Balanced both on offense and defense, the Comets cruised to a Division 3 regional crown with an 11-0 championship shutout victory over Buchanan and a 4-0 win over Schoolcraft in the semifinal.

Sixth-ranked Coloma (34-8) advances to the state quarterfinals and plays No. 3 Napoleon 5 p.m. Tuesday at Hope College.

Skylar Crisenbery led Coloma with five strikeouts, allowing only three hits with no walks through four innings. Jaidyn Hutsell came in to close the game, taking out three consecutive batters for the win.

“In the main season we’ve gone back and forth with (Crisenbery and Hutsell),” said Coloma coach Wendy Goodline. “Here at the end Skylar has thrown. Her ball moves, she has more finesse. She doesn’t overpower you, but she can spin it and it goes where she wants it to go.

“Jaidyn is a harder thrower, so our plan is to have her come in and close out games in the postseason. She has been a great addition for us this year.”

Coloma went to work early with a 2-0 lead with RBI doubles from Morgan Wagner and Megan Koeningshof.

Koenigshof added another run in the third with a long RBI single, as did Wagner and Kayla Yore.

“That’s a heck of a ball club right there,” said Buchanan coach Mike Welsh. “They have some hitters. Top to bottom they have hitters.”

Buchanan (24-13) fatigued by the third inning. Sammi Luzadre, pitching back-to-back games, struggled in the circle allowing 14 hits with two walks and no strikeouts.

“Any day you’d want to have that one day break was today,” said Welsh.

Alyssa Dillenbeck popped a solo home run in the fifth inning. Wagner belted a two-run double to make it a 10-0 game.

Koeningshof finished with four singles and an RBI. Wagner had two doubles with four RBIs, and Hutsell hit a single with three RBIs.

“It’s not a case when you get down to 7, 8, 9 they can’t hit,” said Goodline about her batting order. “One might be off one day, but the rest have their back. It’s a pleasure.”

Luzadre had the best outing for the Bucks with a double.

Coloma put down Schoolcraft 4-0 in the first semifinal. The Comets scored two runs in the second and fourth innings, and manged to hold on for the win.

Buchanan worked hard for a 5-1 win over Hopkins to reach the finals. The Bucks got out to a 3-1 lead after two innings, scoring off an error and an wild pitch in the first inning, and then off another error in the second.

Buchanan held the two-run lead through the bottom of the sixth. Luzadre knocked out a double to the back of the fence for two runs, bringing in Jayla Bibbs and Taylor Reed.

Bibbs had two singles. Luzadre had a single, a double and two RBIs, while Erika Donathen had a double.

After Saturday’s loss, Buchanan’s players lined up one by one and hugged their coach. Welsh will not be returning to coaching duties next season as the school decided not to bring him back.

“I am so proud of this team because we’ve been through a lot this year, and they never quit. Never quit,” said Welsh. “It’s been a great career.”

Welsh has coached the Bucks for 28 years, holding a 692-345 career record with 12 district titles including the one Buchanan won last weekend.

“Ain’t good enough, though,” said Welsh about his accomplishments. “It’s been hitting me since I was told. When you do things the right way and it ain’t enough that hurts, you know? I have had a great career and great support from every other school and players this year.

“I have a lot of offers. I will gather myself and end up somewhere. I have too much to give to somebody yet.”