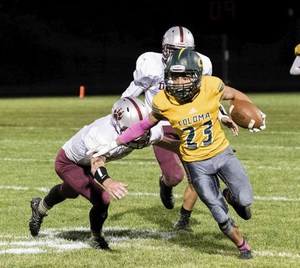 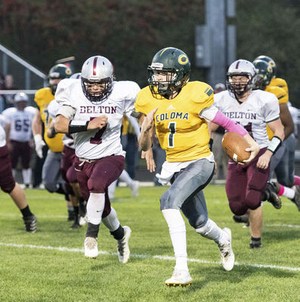 COLOMA — Coloma’s football team gave everything it had in Friday night’s game against a much bigger Delton Kellogg squad, yet it just wasn’t enough.

After making three second-half touchdowns, Comets’ quarterback Zach Goodline tossed a 38-yard, game-winning TD to Cody Reece only to have it called back in a 23-20 loss.

“We had one of our receivers covered up and we ran the pass, making it an ineligible receiver downfield,” said Coloma coach Joe Stephens. “It was a tough call on the last play of the game. They believed the whole way they were going to win the game. They believed it in the locker room at halftime, and it showed in how they played.”

Goodline attempted to make the pass again with eight seconds to go, picking Levi Wilkens as his intended target, but it was broken up just outside the end zone.

“There wasn’t a doubt in our mind that we needed to make adjustments because of their athletes,” said Delton coach Ryan Bates. “We knew they could put us in this position. These guys came back and put their hearts in it. This is the best Coloma football team I’ve seen in a while.”

Coloma (2-2 SAC Valley, 5-3) battled back from its own 12-yard line with under a minute to go in the fourth quarter, with Goodline gaining ground from a 15-yard pass and a 10-yard run.

Wilkens helped build some momentum in the third quarter, scoring off a 9-yard pass from Goodline to close the gap  17-7.

Smith carried the ball nine times for 77 yards. He also had eight tackles.

“That was a big momentum swing,” said Stephens about the onside recovery. “It gave us a boost. Offensively we didn’t adjust much, we just had to trust our stuff.

“Defensively we kept more to our base instead of slanting or squeezing to take away more of their power game instead of falling into their trap game. They are pretty broken up at the moment, but we will come back next week.”