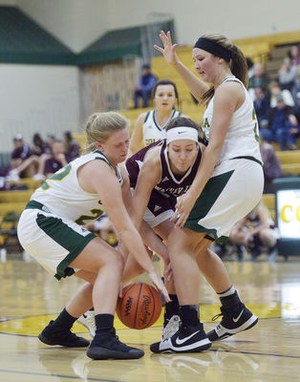 COLOMA — Coloma’s boys basketball team finished with a season-low point total on Saturday night. Fortunately for the Comets, the defense picked up the slack.

Coloma defeated Kalamazoo Hackett 54-49 in overtime in a Southwestern Athletic Conference non-divisional matchup at Coloma despite an uncharacteristically sluggish first half of basketball.

The Comets won the girls game of the doubleheader 39-33.

In the boys game, Coloma (9-0) scored just 14 points in the first half while committing 16 turnovers and trailed the Irish 29-14 at the half.

The Comets flipped the script in the second half, holding Hackett (9-2) to 17 points and forcing the Irish into 18 turnovers.

“(Hackett) played tougher defense and they got after us,” said Coloma coach Paul Marfia on the Comets’ slow start. “We tried to force too much, and our heads were too big. (Hackett was) well-coached in their defense. They took three or four charges in the first half.

“They just built a mountain for us to climb. Luckily, we’re good mountain climbers. I don’t think we could’ve made it any steeper. We came out at halftime, and I said, ‘this will be a hell of a story, the comeback that we made.’ That’s the mindset you have to have. You can’t think any other way, or else it’s never going to happen.”

Coloma took its first lead with 5:45 remaining in the game after Phillip Caldwell stole the ball and found Zach Goodline for an open transition 3-pointer. Goodline’s shot put the score at 36-34.

The Comets extended their lead to 41-36 with under a minute to play, but Hackett’s Cooper Smith knocked down two late 3-pointers to keep the Irish in the game.

With under 10 seconds remaining, Caldwell sunk two free throws to put the Comets ahead 46-44.

The Irish would get a last second 3-point attempt up in the final seconds, and Hackett’s Jacob Niesen was able to tip in the high rebound as time expired to force overtime.

Goodline shot 4-for-5 from the free throw line in the overtime period and Caldwell added a basket. Levi Wilkens knocked down a free throw with time winding down to put the game out of reach.

“I believed in these kids, and they’ve been working hard and getting better,” said Marfia. “Tonight Hackett played well, and we didn’t play well. Luckily, we didn’t point fingers, we didn’t lose our mind, and we showed a great deal of mental toughness.”

Goodline finished with 20 points for the Comets despite scoring just two in the first half.

Smith scored 17 points for the Irish, and was one of the few bright spots in Hackett’s second half offense.

“I though we controlled the game and borderline dominated for about 20 minutes of the game,” said Hackett coach Mark Haase. “Into the third quarter, they made a couple shots. We started to really turn the ball over. We had a lot of very poor possessions where we just kind of threw the ball out of bounds.

“We hadn’t done that all year, but tonight we did that at an inopportune time.”

In the girls game, Coloma (6-4) outlasted Hackett (4-5) despite a late push from the Irish.

The Comets took a 32-17 lead into the fourth quarter, but Hackett’s Sydney Preston knocked down 7-of-9 free throws in the final quarter to help the Irish get back into the game.

“It’s better to give up a basket then to have them score (on free throws), because it stops the clock,” said Coloma coach Fred Paulsen. “We didn’t manage the clock very well. We tried to do too much when we had the lead.

“We get too ahead of ourselves. We played really well (up to that point). We broke the press, we had some people off the bench that gave us good minutes.”

“When we scored, it was textbook as far as I’m concerned,” said Paulsen. “It’s a good win for us. Any time you win (is good). We’re trying to get on a little run. With Gobles beating Watervliet (on Friday), we’re not out of anything. We just have to play a little better.”