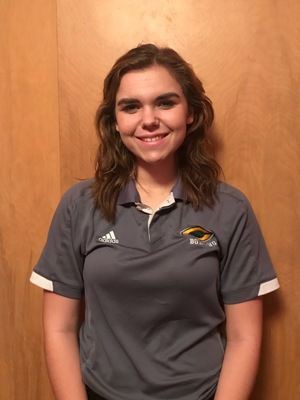 Coloma’s Morgan Hosbein has continued to get better in her 10 years as a bowler, and it seems she can only keep improving.

The 15-year-old sophomore has emerged as one of the Comets’ top bowlers, averaging a 167 this season in helping Coloma get off to a 12-0 start.

Coloma coach Carley Burrell said she’d had her eye on Hosbein since before high school.

“I watched Morgan bowl when she was in the eighth grade, and I knew then she was going to do great things for the program when it was her turn,” said Burrell. “I can easily say that Morgan has made the biggest transformation out of any other bowler in my five years as head coach.

“I have worked with her on several different occasions in the past two seasons working on improving her form, delivery and even mental game. It helps immensely that she’s been wanting to learn as much as I’ve been wanting to teach her.”

Hosbein is also a member of the Coloma softball team and is a part of the yearbook staff.

She carries a 4.0 GPA in the classroom. Her favorite subject is math.

How has the season been going so far?

When did you first get into bowling as a sport?

I started bowling in first grade on leagues at Coloma Lanes with a whole bunch of friends. One day my friend Emily, who is actually on the bowling team now, she called me and said, ‘Do you want to do a league with me?’ I said, ‘Sure I’ll try it.’ I did leagues from first grade through eighth grade at Coloma Lanes, and last year, in high school, I joined the high school bowling team.

I love the thrill when you’re the anchor bowler, it’s the 10th frame and you’re down or it’s tied, and everything is just relying on you. It’s the best feeling ever, especially when you pull through and you get it. I’ve been bowling a lot of anchor position this year, and (coach Burrell) has been helping me with pressure ever since the beginning of the season. It’s great. I’m really starting to thrive off of it.

Do you have any individual goals for the season?

Where did you learn your bowling form and technique?

I’ve learned everything from (Coach Burrell). I was never coached until last year when I joined the team, and she fixed me a lot. It’s not that my form was terrible, but she’s definitely been helping me perfect my form and get it down to a science. I really owe it all to her for how far I’ve gotten.