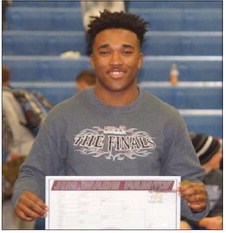 Jamane Smith brings a lot of passion to the wrestling mat, and it’s a big reason why he’s undefeated this season.

The 189-pound senior Coloma wrestler has been perfect on the mat this season, winning all 37 of his matches. That includes a recent victory over Three Rivers’ Tyler Moore, a 215-pounder who placed fourth in the Division 2 state finals last season.

Coloma wrestling coach Ken Ashley said Smith has worked incredibly hard to get up to a high standard of wrestling, but it hasn’t always been easy for him.

“He’s a big part of what we can do as a team,” said Ashley. “It’s pretty nice when I can put somebody out there and I know I can get six (points) from him every time. I just know that if we’re down by six or we’re down by five, and he’s still got to wrestle, then we’re going to win.”

Smith attended Benton Harbor through fifth grade before transferring to Berrien Springs for middle school, where he first started wrestling.

After spending a year in Texas, Smith moved back to Michigan to attend Coloma and get serious on the mat.

He placed eighth in last year’s Division 3 state finals, but is hoping to make a run towards a state championship.

Smith is also a running back and outside linebacker on the Comets’ football team and plans to go out for track this year as a sprinter.

He carries a 3.0 in the classroom and hopes to one day work for the FBI.

How has the season been going so far?

It’s going pretty good. My coach is pushing me, motivating me every day to go harder and harder. It’s all mental, you know. I just go hard every day. I work hard, because I want to be successful in life and I want to win a state championship this year, so I know it’s going to be very tough, so I’m just hammering myself for a state championship.

Is that one of your individual goals this year?

Yeah, my goal is to win state. I just have to keep working hard and stay smart when I wrestle. I have to stay focused. When I go out there, all that negativity and stuff, just don’t let it get to me and wrestle.

When did you first start getting into wrestling as a sport?

I’ve been wrestling since middle school. Before I ever got (to Coloma), I was at Berrien (Springs). When I went to Berrien, my friends got me into wrestling, so I tried it out and I just liked it. It’s a very physical sport, and I just like the slamming and the physicalness of it.

Do you have something that you’d say is your favorite part about wrestling?

My favorite part of wrestling is just the hard work. Conditioning, that motivates me. I just like working hard at what I do. I just love the sport. I love everything about it.

Where does your passion for wrestling come from?

I really don’t know. There’s really no athletes in my family, so I just got blessed with it. I’ve just been working so hard to get better at it.