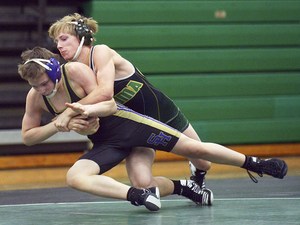 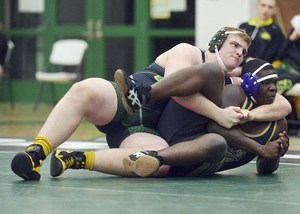 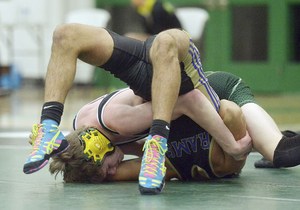 “It’s always good to win something for the kids and for the school,” Coloma coach Kenny Ashley said. “It feels good.”

Coloma reached the final with a 54-27 win over Benton Harbor. South Haven won its semifinal 33-25 over Berrien Springs.

Coloma (14-16) advances to face Dowagiac in next Wednesday’s regional at Lake Odessa Lakewood.

“Going into regionals, we’re going to have to stay off our back if we want a shot at winning,” Ashley said. “There’s going to be a lot of tough teams there. I know (Dowagiac is) wrestling tough right now and they’re looking good.”

Though South Haven and Benton Harbor both struggled against the Comets, the two had encouraging seasons as they look to rebuild their programs.

The Rams had back-to-back technical fall victories against Coloma by Trevor Winkel (112) and Drake Stolt (119). Other winners were Jackson Calvert (171) and Preston Calvert (215)

“We had a couple freshmen and first-years wrestle tough today,” Benton Harbor coach Ryan Berry said. “Unfortunately we didn’t get the ‘W’, but the kids have been working hard all year long so it’s hard not to get your hopes up. Coloma was the favorite, but the kids went out there and wrestled their toughest.”

Berry was pleased with the team’s progress in his first season as coach, including the nine dual wins.

“It’s been a really long time since Benton Harbor’s won a dual,” Berry said. “Half the battle is getting kids into the lineup. We were able to accomplish that this year.”