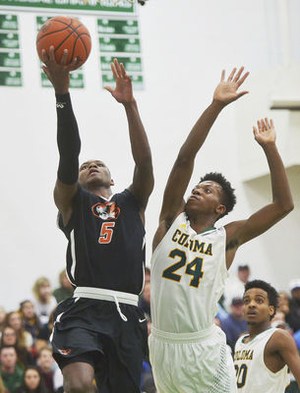 Benton Harbor pulled away with a dominant second half, defeating Coloma 77-49. The Tigers advance to play South Haven, an 80-56 winner over Buchanan, at 7 p.m. Friday for the district title.

“They’re very talented, one through 15,” Coloma coach Paul Marfia said. “They’re a good team. There’s no reason why they shouldn’t win a state championship or be at the Breslin. They’ve got the talent to do it, there’s no doubt about it.”

“Teams aren’t going to focus in on Carlos, because he is a big player for our team, but everybody is talented offensively,” Baxter said. “If you try to stop one guy, you’ve got to stop four other people.

“Carlos gets the game ball because he sacrificed his scoring tonight,” Benton Harbor coach Corey Sterling said. “He helped us a lot of other ways – contesting shots, rebounding, diving on the floor. He impacted the game.”

Zach Goodline scored 25 points to lead Coloma (18-3), including three 3-pointers in the first quarter as the Comets took an early 11-8 lead.

Unlike the first meeting between the teams, when Coloma led 21-8 early on before falling 55-46, Benton Harbor didn’t fall far behind early. The game was tied at 13 after one quarter, and Benton Harbor was up 32-25 at halftime before pulling away with a 12-2 run in the third quarter.

“We had a good plan against Zach,” Sterling said. “He still got his buckets, but we wanted to just contain him. He’s going to score, you can’t stop a scorer, but you can contain him.

“Once they finally went man, we were able to get out and run our stuff. Then the pressure defense we put on them, with our hands in the passing lanes, that was great.”

Nichols had 12 points during the second half, including a pair of breakaway dunks.

“Devan came out of his shell tonight,” Sterling said. “Devan blossomed tonight. This is the type of game we’ve been waiting for Devan to have. He was our offensive player of the game.”

“I’m very proud of my team,” Marfia said. “We’ve had a hell of a season, 18-3 and two of those losses are to Benton Harbor. I told my kids they’ve accomplished a lot from where we were at four years ago. I’m proud of my seniors. As a coach, all you ask is that your kids get better, and I feel they’ve done that.”