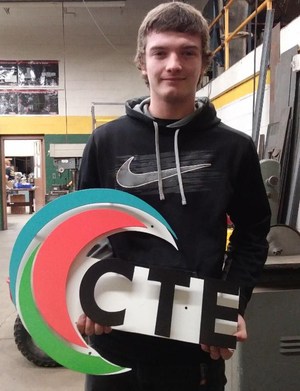 At the beginning of this school year, Coloma High School was asked to build a replica of the national CTE logo. The project was given to Kacey Snyder, a second year student in Mr. Luchies welding class. Kacey was told that he had to follow the shape and colors of the sign, but that he would have to troubleshoot how the class was going to cut, weld, powder coat, and assemble the sign.


Before assembly, Kacey had to color the steel to match the logo. He also had to figure out how to put the piece together while hiding the fasteners. With a little coaching, Kacey took off to the races with this project and finished it beautifully. The project will go to the MITES Regional competition held at Coloma High School from May 3-5 to qualify for the state finals in Lansing the following week.