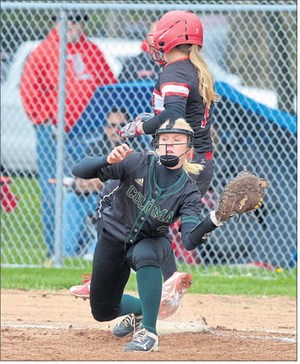 Goodline wraps up wins number 500 and 501 in weekend wins

ST. JOSEPH — Coloma made it back-to-back championship weekends, winning the St. Joseph softball invitational on Saturday by defeating Lakeshore and the host Bears.

The Division 3, No. 1-ranked Comets made key defensive plays to secure a 3-2 victory over the Lancers and 5-4 win over St. Joseph.

St. Joseph (8-12) threatened late in Saturday’s finale with runners on first and second, but a soft grounder by Olivia McQueen gave Coloma third baseman Sam Stewart the room she needed to cut down the Bears’ offensive.

Stewart scooped the ball up and tagged out Gabby Dilley as she headed for third, and threw in time to get McQueen out a first for a double play.

Coloma (24-1) then wrapped up the win with a Hannah Bachteal groundout to first.

“I got on Sam for not making that play earlier, and then she comes through and makes it at a critical time,” Coloma coach Wendy Goodline said. “It wasn’t a real pretty game for us in the second game, but they got better (at correcting) mistakes they made earlier in the game, and we managed to battle back and come through when we needed it.”

The Comets also had crucial defensive plays in the third and fourth innings.

They tagged out Sydney Briney and Elie Haunhorst as each tried to steal second and third base in the third inning. And they had another double play with Mya Potter catching a line drive toward center field and throwing out Bachteal on first.

“(Coloma) made a couple more plays than we did, and we ran ourselves out of a couple of innings there,” St. Joseph coach Joe Spitale said. “Good teams find ways to get you out and those are things we have to figure out.”

Jaidyn Hutsell had big hits for the Comets, racking up three home runs, four RBIs and a single. Crisenbery

had two singles, a double and an RBI. Morgan Wagner ended the day with four singles and two RBIs.

Coloma has out scored its opponents 57-14 over its last nine games, but struggled to put up big numbers against St. Joseph’s Reagan Remus and Lakeshore’s Taylor Simon.

“It wasn’t the best day for hitting,” Goodline said. “(Against Lakeshore) I kept telling them that three runs isn’t enough, and luckily it was. We had some opportunities (in both games) to score more but we left people on base. Remus from St. Joseph makes them a better team, and Taylor is a good pitcher from Lakeshore, and they make things hard on you.”

Remus pitched two complete games, striking out a total of 15 batters with no walks, and helped in carrying the Bears to a 7-3 victory over rival Lakeshore.

“She had a great day,” Spitale said of his pitcher.“You aren’t going to get every batter out, but I thought she did a great job battling all day and finding her spot. “We got the lead and that’s what you want to do against a good team. We didn’t make many errors that game. We had some timely hits, played good defense and pitched well (which)

gave us some opportunities. It was a good day of softball.” The Lancers, ranked No. 1 in Division 2, struggled to put a complete game together and ended up losing both games.

“We had our chances, that’s for sure,” Lakeshore coach Denny Dock said about his team’s performance. “We needed a couple two-out hits and didn’t quite get them.”

Saturday’s victories marked wins No. 500 and 501 for Goodline, who has been the Comets head coach since 2000.

“It’s exciting,” she said. “I’ve had great kids and a good program where they expect to win so they work hard. It really makes it easy to coach this group. I don’t have to get on them all that often, they get on themselves. I’ve been blessed with that.”