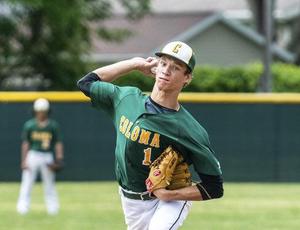 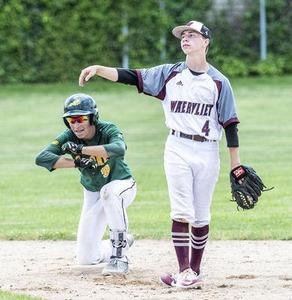 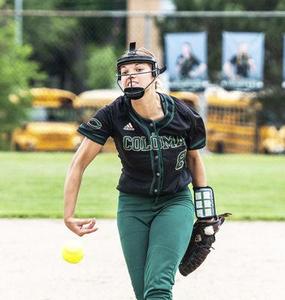 Class of 2018 leads Comets to baseball/softball district titles and event championship at state track meet
Following the celebration of the Class of 2018 after their graduation on Friday night, the senior class at Coloma High School continued their celebration on Saturday with victories in the district tournaments in baseball and softball, and a 7th place finish in the boys state track meet in Comstock Park, which included a state championship performance in the 4 x 200 relay.

In the semifinal, Coloma scored six unearned runs in the top of the fourth to knock off No. 3 rated Watervliet, 6-0.

In its title tilt, Coloma (17-16) tallied eight runs in the top of the second on four hits and coasted home as Bangor managed just three hits off winning pitcher Hunter Crist, including a solo homer over the left field fence by Marshall Weber.

In its win over Watervliet, the Comets’ Senior Calvin Starnes allowed a leadoff single to Jacob Aldrich, but didn’t give up another hit in tossing a complete game shutout. Starnes struck out five, setting a Coloma single season record of 120 strikeouts.

The Panthers’ Garrett Matthews suffered his first loss of the season, as Coloma tallied six unearned runs in the fourth thanks to three Panther infield throwing errors. The key blow in the inning was a two-run double by Ethan Price.

“That was a huge win against a great team,” VanPeteghem said of the upset of Watervliet. “We had a great game against them (an extra inning 2-1 loss) for the conference championship last Friday. We made some adjustments in practice this week knowing we’d see them again, and the kids responded.

“The kids put some good swings on them, and we had one big inning, but that’s baseball,” added VanPeteghem. “Calvin (Starnes) has had a tremendous career here for four years and I’m so glad to see him come through and help us win a district championship.

“I think we’re better than our record indicates,” added VanPeteghem. “We’ve played some good teams. And, we just needed Hunter (Crist) to go out there and throw strikes once we got that big lead in the championship game. And, he did.”

Coloma’s softball team shut out Hartford 6-0 in a Division 3 district championship game Saturday in Coloma, after rallying to top the host Panthers 5-3 in the semifinals.

Coloma (33-3), ranked No. 2 in Division 3, advances to play Jonesville at noon in next Saturday’s regional at Buchanan. The Comets won their third straight district crown.

Watervliet’s Kara Liles hit a two-run triple in the bottom of the third to give the Panthers a 3-0 lead, but Coloma answered with four runs in the top of the fourth.

The Comets were in control the whole way against Hartford, allowing just three hits. Senior Skylar Crisenbery was the winning pitcher in both games for Coloma with help from fellow senior Jaidyn Hutsell.

Megan Koenigshof and senior Morgan Wagner had five hits apiece on the day for the Comets. Senior Kayla Yore also homered against Watervliet.

Coloma's boys track team had a championship relay team in the state meet at Comstock Park. The Comets’ team of Caleb Ellis, Sincere Taylor, and seniors Josh Young and Derek Plitt won the 800 relay with a time of 1:28.61.