Shoe swap pays off for Comets 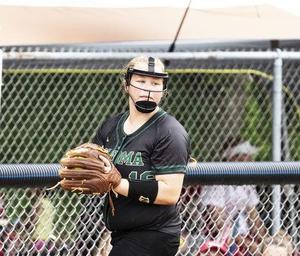 Hutsell pitched Coloma to a 5-1 victory over Constantine and a second straight Division 3 regional softball title.

Hutsell was struggling early on with wet conditions on Lakeshore’s turf field, but regained her footing after borrowing a pair of turf shoes from Crisenbery, the other half of the Comets’ dominant pitching combination.

“The shoes I had on didn’t have grip, and with the turf being wet, I just kept slipping,” Hutsell said. “(Crisenbery) has turf shoes actually, so we just swapped them.”

“Jaidyn did a great job of staying controlled,” Coloma coach Wendy Goodline added. “She pitched fantastic. I truly think changing to the turf shoes made her throw harder.”

“That was our goal, to get farther than last year,” Goodline said. “One more win and we’ll reach our big goal.”

Crisenbery pitched Coloma to a 10-0 victory over Jonesville in Saturday’s regional semifinal at Buchanan, but the championship game was postponed due to weather and eventually moved to Lakeshore.

“I’ll be honest, when it got changed here, I was kind of happy about it,” Goodline said. “We’ve played here several times, I knew (Constantine) hadn’t. I knew it wouldn’t intimidate our girls one bit.”

Though the turf field allowed the game to be played, conditions were still wet. Hutsell was struggling with her grip on the ball in the sixth inning, repeatedly reaching for a towel to dry the ball.

She gave up a leadoff single to Constantine’s Kim Maddox, then fell behind 3-0 against cleanup hitter Brianna Herrick.

She recovered to strike out Herrick and the next batter, Trasandra Ragsdale. She added two more strikeouts in the bottom of the seventh to bring her total to nine and finish off the win.

“I hate pitching in the rain, because I always have to dry off the ball,” Hutsell said. “When my hands are wet, I don’t feel like I can grip it. I just needed to keep a towel in the back pocket and keep going.”

Coloma took advantage of some Constantine errors to score once in the first inning, then added two more runs in the top of the third. Hannah Mathis and Megan Koenigshof hit back-to-back triples, and Kayla Yore followed with a double.

Constantine’s only run came in the third inning, the inning in which Hutsell switched shoes.

Mathis’ third hit of the game brought in another Comet run in the sixth, and Morgan Wagner added a solo home run in the seventh.

“(Cole) is a rise ball pitcher,” Goodline said. “She throws rise balls and inside screws a lot. So we got to the back of the box, we got off the plate. We told them ‘swing at nothing above your hands’. Those who followed our game plan were quite successful.”

The baseball team suffered a 15-0 setback against Schoolcraft in the regional championship, but after knocking off 3rd ranked Watervliet and 2nd ranked Homer in consecutive games, they certainly made a strong statement at the end of their season.