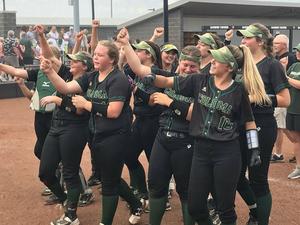 2nd-ranked Comets rout Central Montcalm, will face No. 3 Clinton in semifinals Friday at 12:30 at MSU

The Comets took control quickly against Central Montcalm, scoring five runs in the top of the first, including a home run by Jaidyn Hutsell. In six postseason games, the Comets have outscored their opponents 51-4.

“I think we’re playing the best we’ve played all year right now,” Coloma coach Wendy Goodline said. “We were aggressive to begin with, jumped out to a good lead. They were young. I think that (start) kind of shot them down a little bit and they struggled.”

Skylar Crisenbery had a big day for Coloma. In addition to pitching five shutout innings and allowing just three hits, she had a single, two doubles and drove in five runs.

“Skylar had a good day,” Goodline said. “She kind of got thrown into the starting rotation. I was originally going to pitch Jaidyn and I changed my mind.”

Hutsell added a double in her second plate appearance, then was intentionally walked. Sam Stewart doubled, Morgan Wagner had two singles, and both drove in three runs. Megan Koenigshof hit two singles and a triple, and Hannah Mathis added a pair of singles.

Coloma expects a tougher challenge against Clinton, who is led by standout pitcher Renee Hoffman. Goodline said she is hopeful that hitting well against Constantine pitcher Mercedes Cole in the regional final will help prepare the Comets for Hoffman’s velocity.