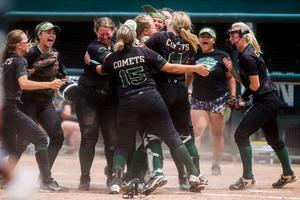 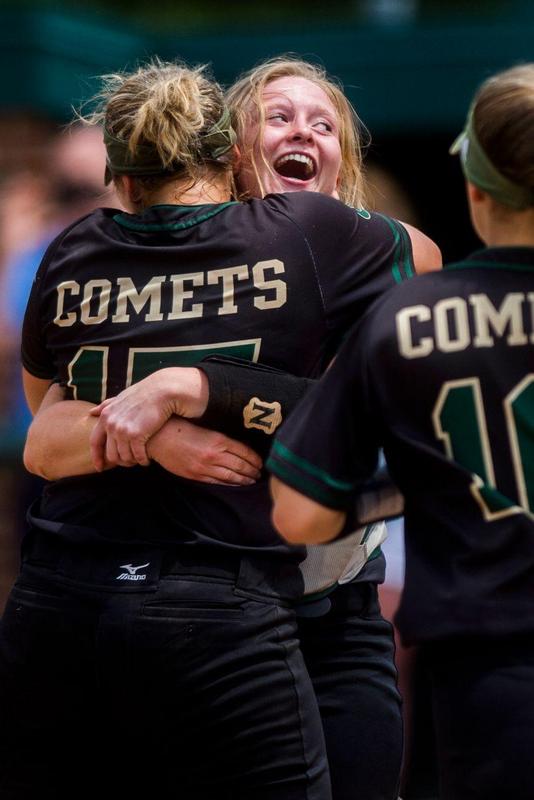 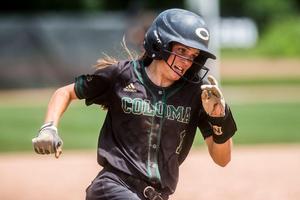 EAST LANSING, MI -- Stop lights rarely exist when Megan Koeningshof is on the base paths for Coloma's softball team.

The light is almost always green.

Koeningshof's blazing speed has been a tremendous weapon for the second-ranked Comets all season and Friday it played a big role in helping them earn a spot in Saturday's Division 3 state championship game against Millington.

The sophomore shortstop scored the game's first two runs before tacking on the final one in a 5-1 semifinal victory over Clinton at Secchia Stadium. All three runs were the direct result of sheer speed, something the Comets have seen from Koeningschof all season.

"She is a huge weapon. Huge," said Coloma coach Wendy Goodline. "Sometimes, her speed gets her because she's almost too fast sometimes. We try to get her to be a little more patient. She doesn't walk a lot because she wants to hit.

"But her speed is fantastic and she's got the green light pretty much on her own. She's got a great sense. She knows the game well. She's going to be a good one."

Koeningshof gave Coloma a quick lead when she led off the game with a walk and went to third on a sacrifice bunt by the Comets' second batter, Kayla Yore. She scored moments later when Morgan Wagner laid down another sacrifice bunt.

"She called a sacrifice bunt so I knew ... if nobody was covering I'm there," said Koeningshof, who was batting .601 with 62 runs scored and 37 steals entering the semifinals. "We need to get scores, score first."

Having Koeningshof go from first to third on the sacrifice bunt is something that has been in the Coloma playbook since the Comets lost an extra-innings game four years ago.

Given Koeningshof's speed, having her do the same thing is no surprise.

"She's supposed to get that head up and look and see if third base is covered," Goodline said. "We talk about that a lot. In 2014, we got beat on that. In '14, we played Gladstone (in the semifinals). In extra innings, a girl got a hit, they put down a bunt and my third baseman stayed back and watched.

"So we talk about that a lot."

In the third inning, Koeningshof made it 2-0 after a two-out double to shallow left-center field that probably should have been a single. Once again, Koeningshof never hesitated on the bases and rounded first at full speed before pulling into second well ahead of the ball.

Koeningshof finished the scoring after getting an intentional walk in the sixth to load the bases with one out. Yore belted a double that took one hop before bouncing off the left-field wall to score Samanta Stewart, Hannah Mathis and Koeningshof all the way from first to make it 5-1.

"I thought that was a good game plan by them but I also knew Kayla could come through," Goodline said. "She's done it time and time again. She's got a few home runs on her record. I was confident and that's what I told her: Make that hurt.

"I felt a lot more comfortable."

The Comets (37-3) will be making their first appearance in the softball championship game when they play No. 1-ranked Millington (39-2) at 3 p.m. Saturday. But they've reached the semifinals three times in the last seven years and made it to the quarterfinals a year ago before being eliminated by Napoleon.

The loss last year has motivated the Comets all season.

"That was our goal, to get farther than last year," Goodline said. "We lost to Napoleon 9-7, they had eight seniors and I was fairly confident that we could go father this year. I have seniors on my team right now. Five of my seven start this year and four of them were regular starters (last year).

"I've read about (Millington) throughout the year. They've been (No.) 1 a portion of the year. At this time, everybody is good. We just have to go play our game."